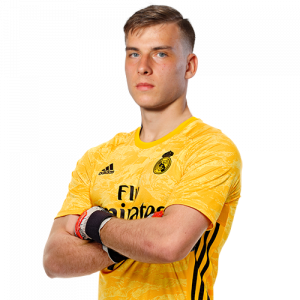 Andriy Oleksiyovych Lunin (born 11 February 1999) is a Ukrainian professional footballer who plays as a goalkeeper for Spanish club Real Madrid and the Ukrainian national team.

Dnipro
From summer 2016, after graduation of the youth sportive school, he played in the FC Dnipro Dnipropetrovsk reserves. In the main-team squad, Lunin made his debut as a start-squad player at the age of 17, in the match against FC Karpaty Lviv on 16 October 2016 in the Ukrainian Premier League. He was Dnipro’s first choice goalkeeper the rest of the season, playing in a total of 25 matches for the club, across the league and club competitions. However, at the end of the season, due to financial irregularities, Dnipro was relegated directly to the Ukrainian Second League (third level of football), and many players, Lunin included, were allowed to leave the club.

Zorya Luhansk
Lunin spent the 2017-18 season playing for FC Zorya Luhansk, where he once again quickly established himself as the first keeper. On 14 September 2017, Lunin made his European debut in a 0-2 Europa League group stage loss to Östersunds FK at Arena Lviv. He ended up playing in 36 matches across all competitions that season, including all 6 of Zorya’s Europa League matches.

Real Madrid
On 19 June 2018, Real Madrid reached an agreement with Zorya Luhansk to sign Lunin in a reportedly €8.5 million plus 5 million add-ons deal. The deal concluded four days later, and he became the first Ukrainian to play for the club. On 27 August 2018, he was loaned to nearby fellow La Liga team CD Leganés, for the season. Halfway through the campaign, he stated that he was content with being second choice to Iván Cuéllar, and would complete his contract.

On 15 January 2020, the loan with Real Valladolid was terminated. On the same day, Real Oviedo announced the loan of Lunin until 30 June 2020.