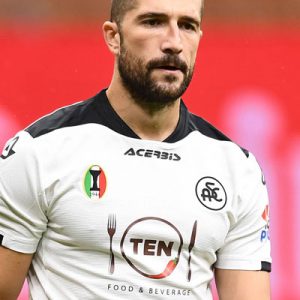 Andrey Asenov Galabinov (born 27 November 1988) is a Bulgarian professional footballer who plays for Serie A club Spezia Calcio and the Bulgarian national team as a striker.

After playing youth football for CSKA Sofia and AC Omonia, Galabinov moved to Italy with his parents at the age of 16. He began his career at Serie D club Castellarano, before moving to Bologna in 2007. Bologna then loaned him out to Giulianova and Giacomense. In July 2009 he joined Serie C1 club Lumezzane and remained there until January 2011 when signing for Livorno of Serie B. He had loan spells at Sorrento, Bassano, Gubbio and Avellino before leaving Livorno to join Novara in 2015. In July 2017 he signed with Serie A side Genoa and stayed with the club for a one season.

Galabinov made his senior debut for Bulgaria in March 2014.

On 17 August 2018, Galabinov joined Serie B side Spezia Calcio on a three-year deal. In his second season at Spezia he earned promotion to the Serie A for the first time in club’s history, scoring 7 goals in 19 league games.

On 27 September 2020, he scored Spezia’s first-ever Serie A goal, in a 4–1 loss against Sassuolo in the 2nd round of the 2020–21 season at the Stadio Dino Manuzzi. On 30 September, he scored a brace in a 2–0 away win against Udinese, to secure Spezia’s first victory in Serie A.