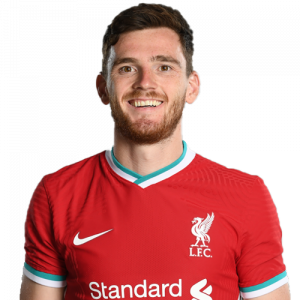 Andrew Henry Robertson (born 11 March 1994) is a Scottish professional footballer who plays as a left back for Premier League club Liverpool and the Scotland national team, which he captains.

Robertson began his senior career with Queen’s Park in 2012 before joining Dundee United a year later. His form in his first season as a professional led to him being named PFA Scotland Young Player of the Year and also making his international debut. He joined Hull City in July 2014 for a fee of £2.85 million, before joining Liverpool in July 2017 for an undisclosed fee, believed to be an initial £8 million. He appeared in successive UEFA Champions League finals in his first two seasons, losing the first in 2018. For his performances in the 2018–19 Premier League season, he was named in the PFA Team of the Year. His third season saw him play an integral role as Liverpool won the 2019–20 Premier League.

Robertson made his full international debut for Scotland in May 2014, and he was appointed Scotland captain in September 2018.