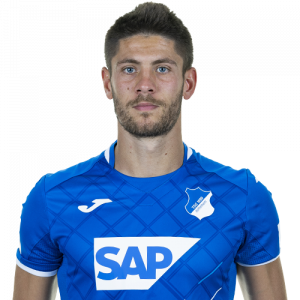 Andrej Kramarić (born 19 June 1991) is a Croatian professional footballer who plays as a forward or attacking midfielder for Bundesliga club 1899 Hoffenheim and the Croatia national team.

Kramarić started his football career in his hometown club Dinamo Zagreb and holds the record as the top youth goalscorer in the club’s history. Hailed as one of the club’s biggest talents, he made his first official appearance for Dinamo at the age of 17. In 2013, after he had a dispute with the Dinamo board of directors, Kramarić was transferred to HNK Rijeka, where he scored 37 times in 42 league games prior to his move to Leicester City for a record £9 million. He played a year-and-a-half there, spending time on loan at 1899 Hoffenheim before moving there permanently. On 29 March 2019, he became the club’s all-time top goalscorer. On 24 January 2021, he became Bundesliga all-time top Croatian goalscorer.

Kramarić was capped 53 times at various youth levels for Croatia, scoring 22 goals in total. He took part at the 2010 UEFA European Under-19 Football Championship, making four appearances for a Croatian team that reached the tournament semi-finals. He made his debut for the senior team in 2014, and later took part at UEFA Euro 2016 and the 2018 FIFA World Cup, helping Croatia to reach the final of the latter tournament.

On 20 January 2016, Kramarić was loaned to Bundesliga club 1899 Hoffenheim. He made his debut against Bayern Munich on 31 January, then scored his first goal in a draw with Werder Bremen, where he also was sent off in the 77th minute for accumulating two yellow cards. On 30 April he missed a penalty against Ingolstadt 04, however Hoffenheim won 2–1. On 25 May 2016, Kramarić signed for 1899 Hoffenheim on a four-year deal for an undisclosed fee.