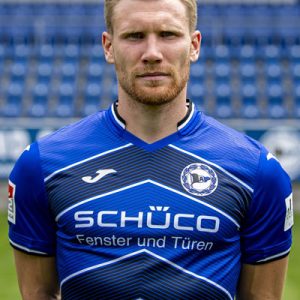 Andreas Voglsammer (born 9 January 1992) is a German professional footballer who plays as a forward for Arminia Bielefeld.

After playing in Bayern Munich’s youth team, Voglsammer signed for Karlsruher SC in 2010, and made one 2. Bundesliga appearance for the club, as a substitute for Alexander Iashvili in a 2–0 defeat to VfL Bochum in October 2010. He left KSC at the end of the season, to sign for his hometown club, TSV 1860 Rosenheim, of fifth tier Bayernliga. After a fairly successful season there, he signed for 3. Liga side SpVgg Unterhaching in July 2012.

In January 2015, half a year before his contract with Unterhaching would have expired, he moved to 2. Bundesliga club 1. FC Heidenheim, signing until 2017. The transfer fee was believed to be about €200,000.

He was released on 19 January 2016 and moved to Arminia Bielefeld.