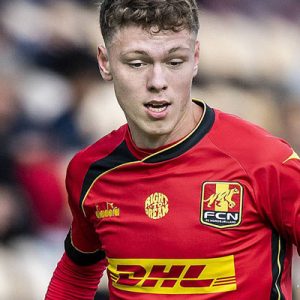 Andreas Skov Olsen (born 29 December 1999) is a Danish professional footballer who plays as a winger for Serie A club Bologna.

Nordsjælland
Already at the age of 17, Olsen was called up by the coach of the Danish national under-21 football team, to replace an injured Kasper Junker in June 2017. He then got his debut for the U21 national team in a game against Sweden U21.

The winger got his first senior call up on 17 July 2017, where he sat on the bench for the whole game against OB. He was also with the first team squad in Sweden in the summer 2017, where he played a in a friendly match.

Olsen got his debut for FC Nordsjælland on 23 July 2017 at the age of 17. He started on the bench, but replaced Emiliano Marcondes in the 95th minute in a 3–2 victory against Brøndby IF in the Danish Superliga. Few days later, he played 72 minutes in a Danish Cup game against amateur side Vejgaard B, where he both scored and assisted a goal.

Olsen was officially promoted to the first team squad from the summer 2018. Olsen had a turbulent first half season in the Danish Superliga scoring an impressing 11 goals despite his young age. He ended the season scoring 22 league goals.

Bologna
On 24 July 2019, it was confirmed, that Olsen had left Denmark after two impressive seasons in the Danish Superliga, to join Italian Serie A club Bologna.