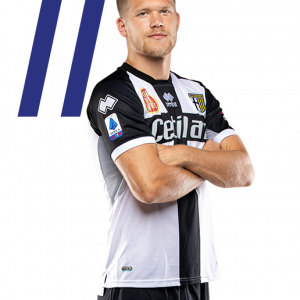 Andreas Evald Cornelius (born 16 March 1993) is a Danish professional footballer who plays as a striker for Parma, on loan from Atalanta, and the Denmark national team.

Atalanta
On 2 May 2017, it was announced that Cornelius would join Serie A side Atalanta for a fee of around €3.5 million.

Bordeaux loan
On 31 August 2018, hours before the closing of the 2018 summer transfer window, Cornelius joined Ligue 1 side FC Girondins de Bordeaux on loan for the season. The deal reportedly included an option for Bordeaux to sign him permanently for a fee between €7 and 8 million.

Parma
On 18 July 2019, Cornelius signed to Serie A club Parma a 2-years loan with an obligation to buy. On 20 October 2019, Cornelius came off the bench in the 11th to substitute the injured Roberto Inglese, and scored a hat trick in a 5–1 home win against Genoa within a span of eight minutes. Cornelius scored a second hat-trick against Genoa later on in the season in a 4–1 away win.