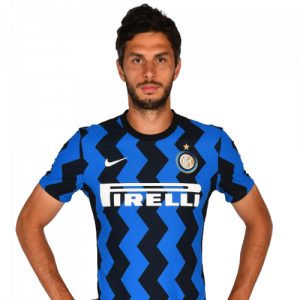 Andrea Ranocchia (born 16 February 1988) is an Italian professional footballer who plays as a defender for Inter Milan.

On 27 December 2010, Inter bought the remaining 50% registration rights of Ranocchia from Genoa for €12.5 million, valuing him at €19 million in total, which was later confirmed by Genoa chairman Enrico Preziosi who expressed his delight at doing business with Inter. The chairman of Inter, Massimo Moratti, spoke on the transfer to Sky Italia and said: “Finally an Italian. We had kept an eye on him from before. It is our project to go ahead with young players.” On 9 January 2011, Ranocchia made his Inter debut in a 2–1 win over Catania in Serie A. He made his Champions League debut against Bayern Munich in the first leg of the round of 16; Inter eventually progressed to the quarter-finals where they were eliminated by eventual semi-finalists Schalke 04. Ranocchia completed his first season with Inter by attaining a second-place finish in Serie A, also winning the 2010–11 Coppa Italia; the following season, however, Inter lost out to Serie A Champions and cross-city rivals Milan in the 2011 Supercoppa Italiana Final.

Ranocchia was appointed as the new Inter captain ahead of the 2014–15 season, replacing the retired Javier Zanetti. On 30 June 2015 Inter announced that Ranocchia agreed to a four-year contract extension, keeping him with the club until 2019. During the 2014–15 season, Ranocchia made a total of 42 appearances and scored two goals, but was replaced as the club’s captain by the young striker Mauro Icardi at the end of the season.

During the 2015–16, Ranocchia’s role was downgraded to that of a substitute under Roberto Mancini, which saw him make only 10 appearances during the first half of the season, mostly as a substitute. Since 2015, he has mainly been used as a back-up, playing seven to 13 games per season. On 28 January 2016, Ranocchia moved on loan to Sampdoria. On 31 January 2017, Ranocchia moved on loan to Hull City until the end of the 2016–17 season. He made his debut the following day when he came off the bench as a 66-minute substitute for Josh Tymon in a 0–0 away draw against Manchester United.He scored his first goal for the club on 1 April 2017 as Hull beat West Ham United 2–1 at the KCOM Stadium. At the end of season, Ranocchia returned to Inter. He was part of the squad on the first day of pre-season training.

In the 2017–18 season, under guidance of Luciano Spalletti, Ranocchia was once again used rarely, making only 13 appearances between league and cup, scoring twice in the process. His contribution during this season helped Inter return to UEFA Champions League for the first time since 2011–12 season.

In the following season, Ranocchia played only 7 matches across all competitions, although he scored his first goal in European competitions; his goal came with a volley outsite the penalty area in a 4–0 home win over Rapid Wien in Europa League on 21 February 2019.

On 29 April 2019, Ranocchia’s contract with Inter was extended to 2021. Moreover, he reunited with his first coach in senior professional football, Antonio Conte, who was appointed manager of Inter ahead of the 2019–20 season. Although he was initially used as a starter for the first two games of the season, even earning praise in the media over his performances, he was once again relegated to the bench as the season progressed. However, he was given an opportunity to start on 20 February 2020, during which he made his 200th Inter appearance in all competitions by captaining the team in a 2–0 win at Ludogorets Razgrad in the first leg of the round of 32 of the Europa League.