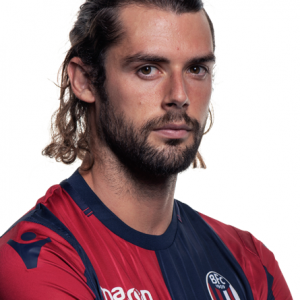 Andrea Poli (born 29 September 1989) is an Italian footballer who plays as a midfielder for Serie A club Bologna F.C., where is also the captain.

Treviso
He started his career in Serie B with his native club Treviso. He made his professional debut aged just 17 years, 2 months and 10 days under manager Ezio Rossi, in a 3–2 loss against Genoa C.F.C. on 9 December 2006.

Sampdoria
On 4 November 2007, he made his Serie A debut for Sampdoria in a 0–3 away win against Cagliari, under manager Walter Mazzarri, aged 18 years, 1 month and 6 days. Andrea also made the bench on six other occasions in the 2007–08 season. He was also part of the Primaverasquad that won the Campionato Nazionale Primavera.

Inter Milan
On 29 August 2011, Poli joined Internazionale on a season-long loan, with Inter having the option to buy him permanently in 2012. After missing most of the first half of the season through injury, Andrea had a very strong second half to the season and made 21 appearances for the Italian giants. Poli scored his first Inter goal in the Coppa Italia match against Genoa in a 2–1 win on 19 January 2012.

Milan
On 8 July 2013, Poli joined Milan becoming their third signing of summer 2013 for €3 million (€1.4 million plus 50% rights of Bartosz Salamon) in a co-ownership deal. Andrea made 37 appearances in all competitions in his first season with the Rossoneri.

On 15 October he signed his first goal for the rossoblu, in the 2–1 against SPAL .