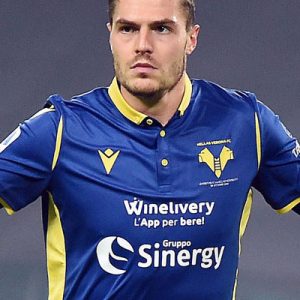 Andrea Favilli (born 17 May 1997) is an Italian professional footballer who plays as a striker for Hellas Verona on loan from Genoa.

He was loaned out to Juventus on 2 February 2015 and played in the Primavera youth team. Favilli made his Serie A debut on 7 February 2016 against Frosinone. He replaced Álvaro Morata after 93 minutes in a 2–0 away win.

Favilli was loaned to Ascoli from Livorno for the 2016–17 season, and later sold to Ascoli for a reported €3 million.

On 10 August 2018, Favilli was signed by Genoa on a season-long loan for a fee of €5 million, with an option to buy for an additional €7 million. They later signed him permanently from the beginning of the next season.

On 18 September 2020, Favilli signed with Verona on loan until the end of the season. He made his club debut on 27 September, during which he scored his first Serie A goal in a 1–0 home win over Udinese.