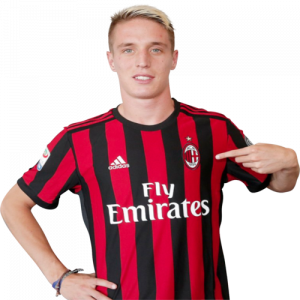 Andrea Conti (born 2 March 1994) is an Italian professional footballer who plays as a right-back for Serie A club Parma, on loan from Milan, and the Italy national team.

Atalanta
Conti was born and raised in Lecco, Lombardy. In 2002, he had a successful trial at A.C. Milan yet refused to join the team due to his dislike of the club’s youth training center in Linate area of the city, as well as its far-from-home location. He also had an offer from the club’s cross-city rivals, Inter Milan, yet eventually joined Atalanta’s youth academy where he would play together with Mattia Caldara and Roberto Gagliardini for over a decade.

Milan
On 7 July 2017, Conti joined Milan in exchange for a reported fee of €24 million, plus Matteo Pessina. He made his debut for the club on 27 July 2017, replacing Ignazio Abate as a second-half substitute in the 2017–18 UEFA Europa League qualification away game against CS U Craiova. He made his league debut in the 3–0 away win against Crotone on 20 August 2017.