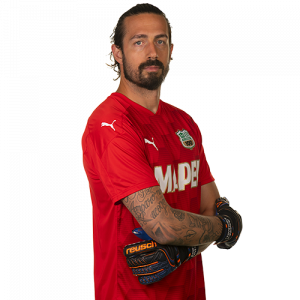 Andrea Consigli (born 27 January 1987) is an Italian professional footballer who plays for Sassuolo as a goalkeeper.

Club career
Born in Cormano, Consigli is a youth product of Atalanta. To gain some first team experience, the young goalkeeper was loaned out to Serie C1 side Sambenedettese in the 2006–07 season. The following season, he was loaned to Serie B side Rimini. After a successful loan spell there, he returned to Atalanta and acquired the number 1 shirt.

On 1 September 2014, Consigli joined Serie A team Sassuolo for €3 million.

International career
Consigli made his debut with the Italy U21 squad on 15 August 2006, in a friendly match against Croatia. Then he was selected by head coach Pierluigi Casiraghi in the squad for the 2007 U-21 Championship as the third choice goalkeeper. After that competition he became the first choice in the goal for Italy U-21 team until the 2009 U-21 Championship.

In 2008, he took part at the 2008 Summer Olympics with the Italian Olympic team, as the back up of Emiliano Viviano.

He received his first call up for the Italian senior team by head coach Cesare Prandelli, for the friendly match against England held on 15 August 2012 in Bern.