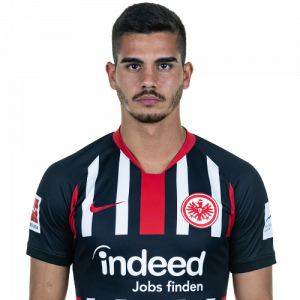 An academy graduate of Porto, he impressed during his time with the reserve side before making his debut with the first team in 2015. He ultimately made over 50 appearances for the club, scoring 24 goals before joining Milan in 2017. He went on to represent Sevilla and Eintracht Frankfurt on loan, signing a permanent contract with the latter in 2020.

Silva represented Portugal at various youth levels, and was part of the squad which came second at the 2014 European Under-19 Championship. His senior international debut followed two years later, and he featured at the 2017 Confederations Cup where his team came third, also being selected for the 2018 World Cup.

On 2 September 2019, Silva moved to Eintracht Frankfurt on a two-year loan deal, with Ante Rebić heading in the opposite direction. He made his Bundesliga debut 12 days later, playing the entire 2–1 defeat at FC Augsburg and partnering compatriot and former Porto teammate Gonçalo Paciência up front. He scored his first goal in the competition on 22 September, netting the first in a 2–2 home draw against Borussia Dortmund.

With the restart of the German league following the COVID-19 pandemic, Silva scored eight goals in ten games for a total of 12 in the campaign. This surpassed by one goal the record for top-scoring Portuguese in a German top-flight campaign, by SV Werder Bremen’s Hugo Almeida.

On 10 September 2020, Silva signed a permanent three-year contract. He was Player of the Month for the following January, with seven goals from six games including three braces.