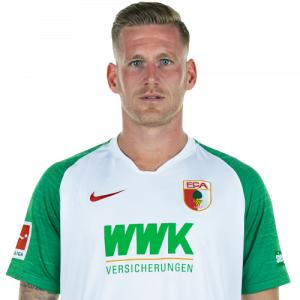 André Hahn (born 13 August 1990) is a German footballer who plays as a winger and forward for Bundesliga club FC Augsburg.

Hahn began his career with Hamburger SV II, who he joined in 2008. Two years later, he signed for FC Oberneuland where he made an immediate impact, scoring eight goals in fifteen matches in the first half of the 2010–11 season.In January 2011 he earned a move to TuS Koblenz of the 3. Liga. He made his Koblenz debut as a substitute for Thomas Klasen in a 3–2 win over Rot-Weiss Ahlen, and made another fifteen appearances as the club finished 11th. However, Koblenz withdrew from the 3. Liga due to financial difficulties, led Hahn to leave the club. He was then snapped up by Kickers Offenbach, another club competing in the third tier.After a successful eighteen months with Offenbach, André signed for FC Augsburg of the Bundesliga in January 2013. He quickly established his place, starting 12 matches in the second half of the 12/13 season and finally helped keep FC Augsburg from getting relegated to 2. Bundesliga.

Hahn further cemented his role in the 2013–14 season by his eye catching performance. He contributed 6 goals for FC Augsburg before the winter break. In 2014, he joined the German Bundesliga side Borussia Mönchengladbach.

André Hahn returned to Hamburger SV, a club he played for in his youth, before the 2017–18 season.Hahn rejoined former Augsburg for an undisclosed fee on 30 May 2018, signing a four-year deal until 2022. Speaking about his transfer, Hahn said: “I’m happy to be back in Augsburg as I feel very at ease here and have much to thank the club for. The club has once again placed its trust in me, and I’d like to repay that the club, all the management and the fans for that.”