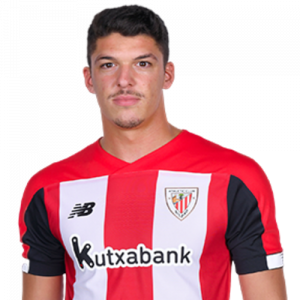 Ander Capa Rodríguez (born 8 February 1992) is a Spanish professional footballer who plays for Athletic Bilbao as a right back or a winger.

He played mainly with Eibar during his career, representing the club in all three major levels of Spanish football. Over seven seasons, he played 214 competitive matches and scored 15 goals.

Eibar
Capa was born in Portugalete, Biscay, Basque Country. He played youth football with local Danok Bat CF before signing for SD Eibar, making his senior debut in the 2011–12 season with the reserves in Tercera División.

In July 2012, Capa was promoted to the first team after appearing once with the main squad in 2011–12. In the following campaign, he played 24 matches and scored five goals (adding 6/2 in the playoffs) as the Armeros returned to Segunda División after a four-year absence.

Capa played in his professional match on 18 August 2013, starting in a 2–1 away win against Real Jaén. He scored his first professional goal on 28 September, but in a 3–2 loss at Sporting de Gijón. He appeared in a further 30 games while netting once during the season, being promoted to La Liga for the first time ever.

Capa made his debut in the competition on 24 August, starting in a 1–0 home victory over Real Sociedad. He scored his first goal in the top flight on 8 December, his side’s last in a 5–2 home rout of UD Almería.

During the 2015 pre-season, Capa was converted into a right back by new manager José Luis Mendilibar. On 19 November of that year, with the club still in the top tier and him as an undisputed starter, he renewed his contract until 2018.

Athletic Bilbao
On 1 September 2017, Capa agreed to join former youth club Athletic Bilbao for four years, with the deal being made effective in July 2018. He scored his first goal for them on 10 November 2019, netting the 2–1 winner in the final minutes of the home fixture against Levante UD through a volley from outside the box; he also provided the assist for the equaliser by Iker Muniain in the same game.