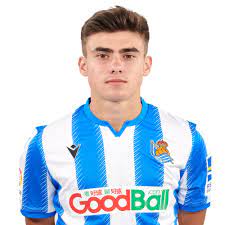 Ander Barrenetxea Muguruza (born 27 December 2001) is a Spanish professional footballer who plays for Real Sociedad as a forward or left winger.

In the 2018–19 season, he began to become involved in training with the senior team, while registered with the club’s C-team playing in the amateur fourth tier. In early December 2018, he renewed his contract until 2025.

On 22 December 2018, Barrenetxea made his professional and La Liga debut as a late substitute for Real Sociedad in a 1–0 home loss against Deportivo Alavés. In so doing, he became the first player born in the 21st century to appear in the competition, the 26th-youngest debutant in the division overall, and the club’s youngest since the Spanish Civil War (behind only 15-year-old Pedro Irastorza in 1934). By coincidence, the player who left the field, Juanmi, was even younger when making his bow in the competition eight years earlier.

Barrenetxea’s rapid progression to the senior team made him the first youth product to appear at that level without already playing for the club’s B-team, known as Sanse, since Antoine Griezmann did likewise in 2009. Two days after his breakthrough, he was back playing with the C-team.

On 9 June 2019, Barrenetxea was definitely promoted to the main squad of the Txuri-urdin.