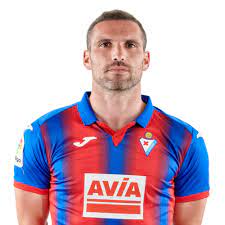 Anaitz Arbilla Zabala (born 15 May 1987) is a Spanish professional footballer who plays for SD Eibar as a full back or a central defender.

Born in Pamplona, Navarre, Arbilla began his senior career in 2004 with CD Basconia, Athletic Bilbao’s farm team. Two years later he progressed to the reserves in the third division and, after two seasons, signed with another club in the Basque Country and that level, Barakaldo CF.

Arbilla moved to Polideportivo Ejido (also in division three) for the 2009–10 campaign. The following year he had his first experience in the second tier, joining UD Salamanca and starting in 29 league games as the Castile and León team eventually suffered relegation.

In late August 2011, Arbilla moved to another side in the second division, Hércules CF, for a €200,000 fee. He reached La Liga in January 2013, after arriving as a free agent at Rayo Vallecano.

Arbilla made his debut in the Spanish top flight on 10 February 2013, playing the full 90 minutes in a 2–1 home win against Atlético Madrid. He started in eight of his 11 appearances as the Madrid outskirts club eventually retained its league status.

Arbilla scored his first goal for Rayo and in the top division on 8 February 2014, his team’s second in a 4–1 victory over Málaga CF also at Campo de Fútbol de Vallecas. On 30 August 2016, he signed a three-year deal with fellow league team SD Eibar.