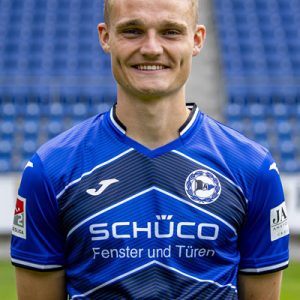 Amos Pieper (born 17 January 1998) is a German professional footballer who plays as a defender for Arminia Bielefeld.

Career
On 28 January 2019, Pieper moved from Borussia Dortmund II to 2. Bundesliga club Arminia Bielefeld. He made his professional debut for Bielefeld in the 2. Bundesliga on 8 February 2019, coming on as a half-time substitute for Brian Behrendt in the 3–0 away win against Jahn Regensburg.

Defender Amos Pieper started his career at FC Nordkirchen at the age of four. After a season at Union Lüdinghausen, he moved to Borussia Dortmund’s youth department in 2010. With the Dortmund team, he was twice champion of the A-Junior Bundesliga. In the 2015/16 season, Borussia won the final against TSG 1899 Hoffenheim 5-3. A year later, Dortmund won the final 8: 7 on penalties against FC Bayern Munich. Amos Pieper converted the decisive penalty for the German Championship in front of the record crowd of 33,450 spectators in Signal-Iduna-Park.

In the summer of 2017, Amos Pieper moved up to the squad of the second team of Borussia and from then on played in the fourth-class Regionalliga West. There he completed 34 games and scored one goal. In January 2019 Pieper then moved to the second division Arminia Bielefeld. He made his professional debut on February 8, 2019 when he came on as a substitute for Brian Behrendt in the half-time break in Arminia’s 3-0 win at SSV Jahn Regensburg. In the 2019/20 season he was second division champion with Bielefeld and was promoted to the Bundesliga. His contract with Arminia Bielefeld runs until 2022. On February 15, 2021 Pieper headed his first goal for Arminia Bielefeld in a 3: 3 against FC Bayern Munich.