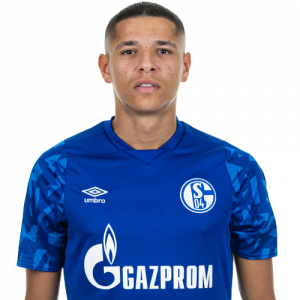 Amine Harit (born 18 June 1997) is a professional footballer who plays as a midfielder for Bundesliga club Schalke 04 and the Morocco national team. Harit was born and raised in France and played for various levels of France national teams before switching to Morocco and joining their national team.

Club career
Nantes
Harit made his debut for the Ligue 1 side on 13 August 2016 against Dijon. He played the whole match in a 1–0 away win.

Schalke 04
On 10 July 2017, Schalke 04 announced the signing of Harit on a four-year contract. The transfer fee paid to Nantes was reported as €8 million which could rise to €10 million with bonuses.

He made his debut for the German club on 14 August in a DFB-Pokal against BFC Dynamo. He started the match and came off at halftime of a 2–0 away win.

On 25 November 2017, Harit scored his first ever Bundesliga goal against Ruhr rivals Borussia Dortmund as Schalke overturned a 4–0 deficit to a 4–4 draw in a historic Revierderby match.

On 11 December 2019, Harit extended his contract with Schalke for a further three years, until 2024.