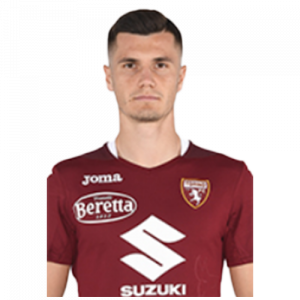 Amer Gojak (born 13 February 1997) is a Bosnian professional footballer who plays as an attacking midfielder for Serie A club Torino, on loan from Dinamo Zagreb, and the Bosnia and Herzegovina national team.

Gojak started his professional career at Olimpic, before joining Dinamo Zagreb in 2015. In 2020, he was loaned to Torino.

A former youth international for Bosnia and Herzegovina, Gojak made his senior international debut in 2018, earning over 20 caps since.

Torino
In October 2020, Gojak was loaned to Italian side Torino until the end of season, with an obligatory buy clause after certain conditions are met. He made his competitive debut for the club in Coppa Italia game against Lecce on 28 October.  A week later, he made his league debut in a victory over Genoa. On 3 January 2021, he scored his first goal for Torino in a triumph over Parma.