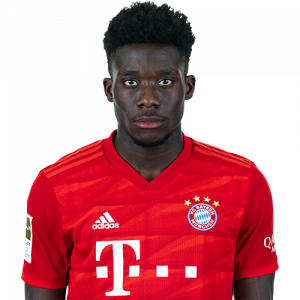 Alphonso Boyle Davies (born November 2, 2000) is a Canadian professional soccer player who plays as a left-back or winger for Bundesliga club Bayern Munich and the Canadian national team. He is considered a highly promising prospect in the media due to his explosive pace, dribbling, creativity, and crossing ability.

Davies was the first player born in the 2000s to play in a Major League Soccer match. Davies joined Bayern in January 2019 from MLS side Vancouver Whitecaps FC on a contract lasting until 2023 for a then-MLS record transfer fee. Davies was named the Bundesliga Rookie of the Season for 2019–20. In that season he also was part of the team winning the continental treble after Bayern won the Bundesliga, the UEFA Champions League and the DFB-Pokal.

Davies is the first soccer player, and first Canadian, to become an ambassador for the United Nations refugee charity UNHCR.

On October 24, Davies was forced off in the third minute of play in an eventual 5–0 home win over Eintracht Frankfurt in the Bundesliga, after sustaining an injury to his right ankle; it was later announced that he was expected to remain sidelined for 6 to 8 weeks.

Davies finished in third place for the 2020 Golden Boy award, behind Erling Haaland and Ansu Fati. On February 11, 2021, he played in a 1–0 win over Tigres UANL in the 2020 FIFA Club World Cup Final.