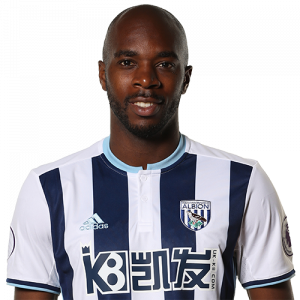 Allan-Roméo Nyom (born 10 May 1988) is a professional footballer who plays as a right back for La Liga club Getafe CF.

He spent most of his career with Granada, appearing in 220 competitive games during six seasons, four in La Liga. He also played professionally in England, with Watford and West Bromwich Albion.

Born in France, Nyom has been a Cameroonian international since 2011. He represented the nation at the 2014 World Cup.

Early years / Granada
Born in Neuilly-sur-Seine, France, Nyom only played amateur football in the country, competing in the reserves championship with AS Nancy-Lorraine and appearing for AC Arles-Avignon in the Championnat National. In the summer of 2009 he was signed by Udinese Calcio from Italy, and was immediately loaned to Granada CF in Spain as part of the partnership agreement between both clubs.

Watford
On 14 July 2015, Nyom signed for newly promoted Premier League team Watford on a four-year contract from Udinese. He made his debut on 8 August, starting in a 2–2 draw at Everton.

West Bromwich Albion
On 31 August 2016, Nyom joined fellow Premier League team West Bromwich Albion for an undisclosed fee. After establishing himself in the starting lineup he got his first assist in a 4–0 home win against Burnley, on 22 November.

Nyom returned to the Spanish top flight in the summer of 2018, signing with CD Leganés on a season-long loan deal. He made his debut for the club on 16 September, playing 85 minutes in a 0–1 home loss against Villarreal CF. He scored his only goal for them three months later, in a 1–1 draw to Getafe CF also at Estadio Municipal de Butarque.

Getafe
On 24 July 2019, after his loan spell with Lega ended, Nyom joined Getafe on a two-year contract with an option for another – West Bromwich continued to report to FIFA asking for a £2.7million compensation.