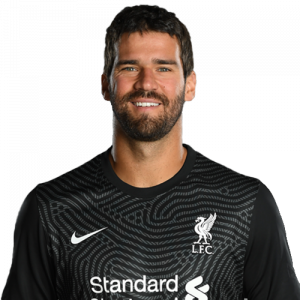 Alisson Ramses Becker (born 2 October 1992), commonly known as Alisson Becker or simply Alisson, is a Brazilian professional footballer who plays as a goalkeeper for Premier League club Liverpool and the Brazil national team. In 2019 he was named The Best FIFA Goalkeeper and was also the recipient of the inaugural Yashin Trophy. He is considered to be one of the world’s best goalkeepers.

Alisson began his career at Internacional, where he made over 100 appearances and won the Campeonato Gaúcho in each of his four seasons at the club. In 2016, he completed a €7.5 million transfer to Roma where he initially served as understudy to Wojciech Szczęsny before breaking into the starting line-up. In July 2018, Alisson signed for Liverpool for an initial fee of €62.5 million (£56m), which could rise to €72 million (£66.8 million); a world record fee for a goalkeeper at the time. In his first season at the club he received the Premier League Golden Glove for most clean sheets in the league (21), and kept another clean sheet in the UEFA Champions League Final to help Liverpool win their sixth European Cup. The following season he kept a clean sheet in the final of the FIFA Club World Cup as the team won in extra time to clinch the trophy. He also played an integral part in Liverpool’s 2019–20 Premier League title-winning effort, which ended the club’s 30-year league title drought.

Alisson represented Brazil at various youth levels before making his senior international debut in 2015 whereafter he represented the nation at the Copa América Centenario in 2016, the 2018 FIFA World Cup, and the 2019 Copa América, winning the latter tournament, while also being named the best goalkeeper.