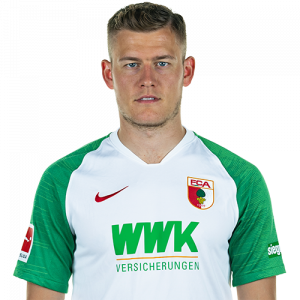 Alfreð Finnbogason (born 1 February 1989) is an Icelandic professional footballer who plays as a striker for German club FC Augsburg and the Iceland national team.

With Heerenveen, Alfreð was the Dutch Eredivisie’s top scorer in the 2013–14 season with 29 goals, a tally topped only by Luis Suárez, Cristiano Ronaldo and Jonathan Soriano in Europe’s top leagues that season.

Alfreð made his debut for the Icelandic national team against the Faroe Islands in 2010. He has earned 61 caps to date, scoring 15 goals. He was part of their squad at UEFA Euro 2016 and the 2018 FIFA World Cup, where he became the first Icelander to score a goal in the FIFA World Cup.