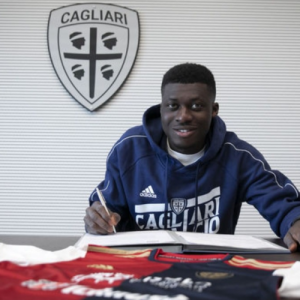 Joseph Alfred Duncan (born 10 March 1993) is a Ghanaian footballer who plays for Cagliari, on loan from Fiorentina, as a midfielder.

Internazionale
Duncan began training with Inter Milan in the summer 2010. But due to FIFA regulations, he formally joined Inter in March 2011, after his 18th birthday. During that time, he lived in Inter training centre “Centro Sportivo Giacinto Facchetti” in Milan. Duncan made his Serie A debut for Inter on 26 August 2012, in a match against Pescara when he came on as a substitute in the 86th minute for teammate Walter Gargano.

Sampdoria
On 19 July 2014, Inter agreed to loan Duncan to the fellow Serie A side Sampdoria for two seasons, until 30 June 2016. The club bought Duncan outright for about €3 million in January 2015. He signed a 4+1⁄2-year contract.

Sassuolo
On 23 July 2015, Duncan was signed by Sassuolo on a temporary deal, with an obligation to sign him outright at the end of season from Sampdoria, for about €6 million. On 6 March 2016, Duncan scored his first goal for the club against A.C. Milan in a 2–0 win.

Fiorentina
On 31 January 2020, Duncan joined Fiorentina on loan with an obligation to buy.