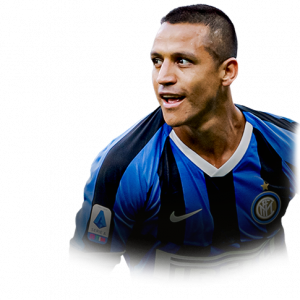 Alexis Alejandro Sánchez Sánchez (born 19 December 1988), also known mononymously as Alexis, is a Chilean professional footballer who plays as a forward for Serie A club Inter Milan and the Chile national team.

Dubbed “El Niño Maravilla” (The Wonder Child), Sánchez began his senior club career playing for Cobreloa, and signed with Udinese in 2006, aged 18; he won consecutive league titles while on loan to Colo-Colo and River Plate. Sánchez was the subject of a record association football transfer when he signed for Barcelona in 2011 in a transfer worth €37.5 million, becoming the most expensive Chilean player of all time. There, Sánchez won six trophies, including a La Liga title and a Copa del Rey. He then joined Arsenal in 2014 in a transfer worth £31.7 million (€35 million), and won two FA Cups, the 2015 PFA Fans’ Player of the Year, and was voted into the 2015 PFA Team of the Year. In 2018, he moved to league rivals Manchester United in a swap deal; he signed for Inter Milan a year later, and won a Serie A title.

Sánchez made his senior international debut for Chile in 2006 at age 18, and has since earned over 135 caps, appearing in five major tournaments, becoming his country’s most capped player and all-time top goalscorer. He led Chile to their first victory in a major tournament by winning the 2015 Copa América, scoring the winning penalty in the final; he captained the team to a repeat of this triumph at the Copa América Centenario, winning the Golden Ball for Best Player.

On 29 August 2019, Sánchez joined Inter Milan on loan for the duration of the 2019–20 season. He said he did not regret signing for Manchester United, but did wish he had played more.

On 14 September 2019, Sánchez made his debut for Inter when he came on as a 79th minute substitute in a 1–0 win against his former club, Udinese. On 28 September 2019, Sánchez scored his first Inter goal from a tap-in, before he was sent off after receiving a second yellow card for an apparent dive inside the box as the club won 3–1 against Sampdoria.