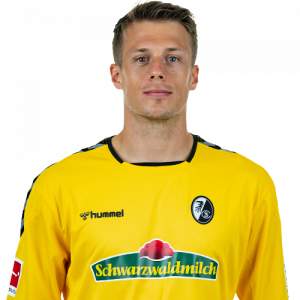 Alexander Schwolow (born 2 June 1992) is a German professional footballer who plays as a goalkeeper for Bundesliga club Hertha BSC.

Youth years
Schwolow began his youth career at 3. Liga side SV Wehen Wiesbaden. He left in 2008 for SC Freiburg’s U17 team from where he later progressed to the U19 team.

On 1 July 2015, SC Freiburg recalled Schwolow after one season on loan at Arminia Bielefeld, after selling Roman Bürki to Borussia Dortmund.

Arminia Bielefeld (loan)
On 1 July 2014, Schwolow agreed to a two-year loan to Arminia Bielefeld who aimed at gaining promotion following their relegation from the 2. Bundesliga. He made his debut on 26 July 2014 in 1–2 win over Mainz 05 II. Schwolow made his first appearance in a non-league game in a 4–1 win over SV Sandhausen in a DFB-Pokal match on 17 August 2014.

Hertha BSC
On 4 August 2020, Hertha BSC agreed on a deal with SC Freiburg to sign Schwolow. The fee was around €8 million.