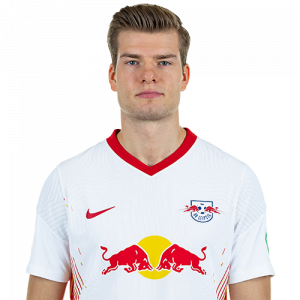 Alexander Sørloth (born 5 December 1995) is a Norwegian professional footballer who plays as a striker for Bundesliga club RB Leipzig and for the Norway national team.

Rosenborg
After several years in the youth system Sørloth was rewarded with a contract by Rosenborg in July 2013. He played his first professional game for Rosenborg when he was subbed on in the second half of the Europa League first qualifying round game versus Crusaders, and it took him only 12 minutes to score his first goal, Rosenborg’s 6th in their 7–2 win.

Groningen
On 6 November 2015, Sørloth confirmed that he would be joining FC Groningen on a 4.5-year contract at the end of the season. Groningen paid a transfer fee of around €750,000.

Midtjylland
On 1 June 2017, FC Midtjylland announced that they had signed a four-year contract with Alexander Sørloth.

Loan to Trabzonspor
In August 2019, Sørloth signed for Turkish Süper Lig club Trabzonspor on loan until the end of the 2020–21 season.

RB Leipzig
After playing for his national team in the first two group matches of UEFA Nations League, Sørloth failed to return to Trabzon prior to Trabzonspor’s upcoming league fixture against Beşiktaş. On 22 September 2020, Sørloth signed for RB Leipzig for an initial fee of €20 million plus €2 million in potential add-ons, with any proceeds to be shared evenly between Trabzonspor and Crystal Palace. On 2 December 2020, he scored the game-winning goal against İstanbul Başakşehir in a 4-3 win in the 2020–21 UEFA Champions League. This was his first goal for the club.