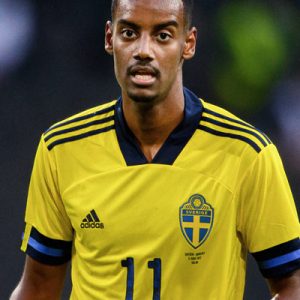 Alexander Isak (born 21 September 1999) is a Swedish professional footballer who plays as a forward for La Liga club Real Sociedad and the Sweden national team.

Starting off his professional career with AIK in 2016, Isak represented Borussia Dortmund and Willem II before signing with Real Sociedad in 2019. A full Swedish international since 2017, he has won over 20 caps for his country, representing the side at UEFA Euro 2020. He is the youngest ever goalscorer for both AIK and the Sweden national team.

Real Sociedad
2019–20 season
On 12 June 2019, Isak signed a five-year deal with Real Sociedad, worth £988,000, £19000 per week, joining the La Liga club on 1 July 2019, in which he scored his first goal in his first game. He strongly continued the pre-season, scoring four goals in five games. Isak scored his first competitive goal for Real Sociedad in a 3–1 La Liga win against RCD Espanyol on 22 September 2019. On 6 February, Isak scored two goals and made one assist in the Copa del Rey quarter-final against Real Madrid. On February 9, he scored the winning goal in the Basque derby against Athletic Bilbao.

On 3 April 2021, Isak won his first silverware with the club when he started and played in 89 minutes of the 2020 Copa del Rey Final in a 1–0 win against Athletic Bilbao, helping Real Sociedad win the 2019–20 Copa del Rey.

2020–21 season
He scored his first hat-trick for the club on 21 February 2021 in a 4–0 league win against Deportivo Alavés, becoming the first Swedish player to score a La Liga hat-trick since Henry “Garvis” Carlsson did the same for Atletico Madrid in 1949.