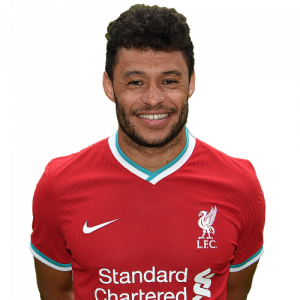 Alexander Mark David Oxlade-Chamberlain (born 15 August 1993) is an English professional footballer who plays as a midfielder for Premier League club Liverpool and the England national team.

After rising to prominence with Southampton during the 2010–11 season aged 17, he signed for Arsenal in August 2011. Scoring twice in his first three matches for the club, Oxlade-Chamberlain became the youngest English goalscorer in UEFA Champions League history and also claimed a regular place in the England under-21 team. Over his six seasons at the Emirates Stadium, he played 198 games and scored 20 goals, winning the FA Cup three times. He signed for Liverpool in August 2017, winning the UEFA Champions League in 2019 and the Premier League in 2020.

Oxlade-Chamberlain made his debut for the senior England team on 26 May 2012 in a 1–0 win against Norway in a friendly. Following this, he received a surprise call-up to the England squad for UEFA Euro 2012, becoming the second youngest player ever to represent England in the European Championships behind Wayne Rooney. He was also called up for the 2014 FIFA World Cup.