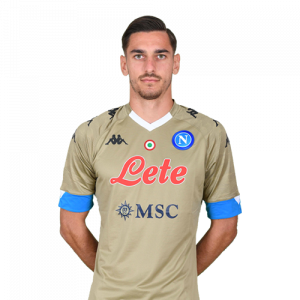 Alex Meret (born 22 March 1997) is an Italian professional footballer who plays as a goalkeeper for Serie A club Napoli and the Italy national team.

Born in Udine, Meret began his career at an early age with amateur club Donatello Calcio before making a switch to the famous Udinese youth system in 2012. After rising through the academy system at the club, he made his senior debut in 2015. He later had spells on loan with SPAL, whom he helped win the Serie B title in 2017, and achieve promotion to Serie A. He joined Napoli in 2018.

He was initially often used in a rotational role along with David Ospina during his first two seasons with Napoli; however, under the club’s new manager Gennaro Gattuso, he was relegated to the bench up until the season break due to the COVID-19 pandemic in March 2020, as the coach favoured the Colombian shot-stopper due to his superior ability with the ball at his feet. Due to a suspension to Ospina, however, Meret started in the 2020 Coppa Italia Final against Juventus on 17 June; following a goalless draw after regulation time, Meret saved Paulo Dybala’s spot kick, helping his team earn a 4–2 penalty shoot-out victory. Subsequently, Meret ended up in the rotation with Ospina again, starting every second match on average until the end of the season. This rotational role was maintained in the following 2020–21 season, with Ospina and Meret taking turns every other match in the Europa League, Serie A and Coppa Italia.