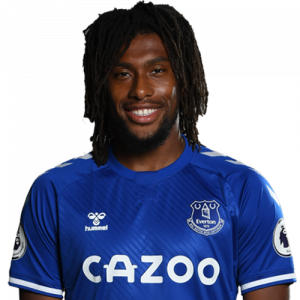 Alexander Chuka Iwobi (born 3 May 1996) is a Nigerian professional footballer who plays as a winger and forward for Premier League club Everton and the Nigeria national team.

He began his career at Arsenal, making 149 appearances and scoring 15 goals, and winning the FA Cup in 2017. In August 2019, he transferred to Everton for an initial £28 million fee.

Iwobi represented England up to under-18 level. He made his senior international debut for Nigeria in October 2015, and was part of their squads at the 2018 FIFA World Cup and 2019 Africa Cup of Nations, coming third at the latter.

He was first involved in a first-team match as an unused substitute in a League Cup match against West Bromwich Albion on 25 September 2013. He signed a long-term contract with Arsenal in October 2015.

On 8 August 2019, Iwobi signed a five-year contract with Everton. According to the BBC, Arsenal received a fee of an initial £28 million, rising to £34 million with potential add-ons.

Fifteen days after signing, Iwobi made his debut as a substitute for the final half-hour in place of Gylfi Sigurðsson in a 2–0 loss at Aston Villa. On 28 August in the second round of the EFL Cup, he scored his first Everton goal in a 4–2 win at Lincoln City. He scored his first league goal on 1 September in a 3–2 win over Wolverhampton Wanderers, and was one of two players singled out for praise by manager Marco Silva afterwards.

Iwobi started as a youth international for England, with whom he won the 2011 Victory Shield. Iwobi went on though to play for Nigeria. He made his senior debut for the Super Eagles on 8 October 2015, replacing Ahmed Musa in the 57th minute of a 2–0 friendly defeat to DR Congo in Visé, Belgium.

He was selected by Nigeria for their 35-man provisional squad for the 2016 Summer Olympics. He was not a part of the 18-man final squad.

In August 2017 Iwobi pulled out of Nigeria’s squad for that month’s World Cup qualifiers due to injury. In October 2017, Iwobi scored for Nigeria in a 1–0 win over Zambia to secure the Super Eagles a spot in the 2018 FIFA World Cup in Russia. He was named in Nigeria’s 23-man squad for the competition and featured in all three games as the Super Eagles were knocked out in the group stage.