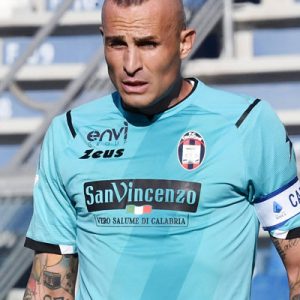 Alex Cordaz (born 1 January 1983) is an Italian professional footballer who plays for and captains Serie A side Crotone as a goalkeeper.

Internazionale
Cordaz started his career at Internazionale. In the 2001–02 season, he was the regular starter ahead Mathieu Moreau for the regular choice at Primavera Team (U20 team), where he won the championship.

When he turned 19, he was farmed to Spezia of Serie C1. He played as the backup of Hugo Daniel Rubini.

In summer 2003, he returned to Internazionale as first team 3rd goalkeeper, while his ex-competitor Moreau farmed to Spezia. Cordaz made his first team debut against Juventus on 4 February 2004 a Coppa Italia match resulted in 2–2 draw.

He left for Spezia of Serie C1 again in January 2005. He won Coppa Italia Serie C along with Inter youth products Riccardo Meggiorini and Hernán Paolo Dellafiore, which they were all left on loan in January 2005.

He spent the 2005–06 season at Acireale of Serie C1 along with Devis Nossa and Fabrizio Biava. He was the first choice of the team, however, he missed the relegation playoff and Simone Deliperi was played. Acireale were relegated after losing in the playoffs.

Treviso
On 31 August 2006, the last day of transfer windows, Cordaz was sold to newly relegated Treviso in a joint-ownership bid, for a peppercorn fee of €500. But he spent the first half of the season on loan at Pizzighettone of Serie C1. During the 2008–09 season Cordaz (€800,000 ca. January 2009) was joined Treviso outright. In January 2009 also saw he return of Gianluca Litteri (€50,000) and signing Samuele Longo and Mame Baba Thiam outright, made the deal involved little cash. Cordaz himself made Inter had a financial income of €799,500 as the value of retained half was increased from €500 to €800,000 in accounting.

Lugano
After Treviso disbanded due to financial issues, Cordaz found himself without a team, and later agreed for a move to Switzerland by joining Swiss Challenge League outfit FC Lugano on a free transfer.

Cittadella
On 5 July 2011, he returned to Serie B for Cittadella, replacing former Inter team-mate Simone Villanova.

Parma
In June 2013, Cordaz was signed by Parma on a free transfer. On 1 July 2013, He was farmed to Slovenian club ND Gorica along with Bright Addae, Daniele Bazzoffia, Uroš Celcer, Massimo Coda, Sebestyén Ihrig-Farkas, Alen Jogan, Gianluca Lapadula, Floriano Vanzo and Fabio Lebran (Crotone/Parma). The deals were finalized on 12 July.

In the first half of the 2014–15 season he failed to seek a new club, thus he became a backup keeper for Parma, despite wearing no.1 shirt. On 9 January 2015, Cordaz left for Crotone, with Pavol Bajza returning to Parma. Cordaz also wore the number 1 shirt vacated by Bajza.

Crotone
On 8 July 2015, Cordaz signed a three-year contract with Crotone.