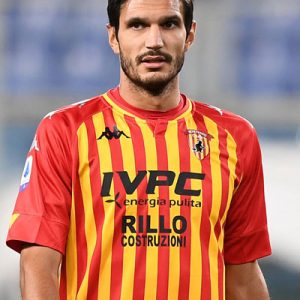 Alessandro Tuia (born 8 June 1990) is an Italian footballer who plays as a central defender for Benevento.

Tuia is a product of the Lazio youth academy and former captain of the Primavera youth team, being invited to train with the senior side in the 2008-09 season. He made his Serie A debut on 31 May 2009, when he came off the bench in the second half of Lazio’s 2–0 defeat to Juventus in the Stadio Olimpico di Torino.

In the summer 2009 he has been loaned to Lega Pro Prima Divisione (Italian third tier) club Monza, in order to gain first team experience. The loan was extended in summer 2010.

In August 2011, he joined Foligno in the Lega Pro Prima Divisione in co-ownership deal and at the end of the season, he came back to Lazio, and then he was immediately sold to Salernitana in another co-ownership deal.

In June 2014 Lazio gave up the remain 50% registration rights of Tuia.