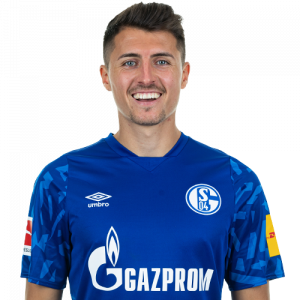 Alessandro André Schöpf (born 7 February 1994) is an Austrian professional footballer who plays as a midfielder for Bundesliga club Schalke 04 and the Austria national team.

Club career
Bayern Munich
Schöpf joined Bayern Munich in 2009 and spent three years in the junior team before being promoted to the reserve squad in 2012. He made his debut on the opening day of the 2012–13 season in a 1–1 draw with Augsburg II, and would go on to make another 28 appearances as Bayern II finished in second place in the Regionalliga Bayern. His eleven goals that season made him the team’s top scorer, behind Marius Duhnke with fourteen. The following season, Schöpf made 34 appearances, again scoring 11 goals, as Bayern II won the Regionalliga Bayern title, but missed out on promotion after losing on away goals in a playoff against SC Fortuna Köln. In November 2013, Schöpf along with teammate Julian Green was given a first-team contract, although he made no appearances during the 2013–14 season as Bayern went on to win the Bundesliga and DFB-Pokal.

Schalke 04
On 7 January 2016, it was announced that Schöpf moved to Schalke 04 and signed a contract until 2019. Despite suffering a cruciate knee injury, he impressed Schalke manager Domenico Tedesco enough to earn a contract extension to 2021, being praised by Tedesco as “Almost a complete player. He is very diligent and runs many, many kilometres in each game. He is versatile and always wants to play, no matter which position it is. In addition, he is technically savvy, is brave and a great person. We’re delighted to be able to continue working with him.”