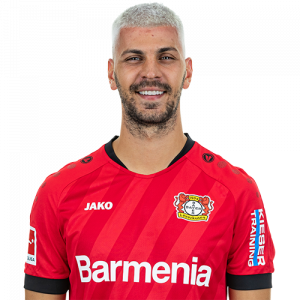 Aleksandar Dragović (born 6 March 1991) is an Austrian professional footballer who plays as a defender for German club Bayer Leverkusen and the Austria national team. He is well known for his performances as a tough-tackling centre-back.From the summer of 2021, Dragović will strengthen Red Star Belgrade, with whom he signed a pre-contract on April 21, 2021.

Basel
Dragović started his career by playing in the youth teams of Austrian giants Austria Wien and started playing for their B-squad in 2007. As of 1 February 2011 Dragović transferred to FC Basel in the Swiss Super League. He made his team debut in the 3:0 home win over FC St. Gallen. At the end of the 2010–11 Swiss Super League season Dragović won the Swiss Championship title with FC Basel. In July 2011 he played with his new club in the Uhrencup and won the tournament. He scored his first Super League goal in the 3–0 home win against Servette FC on 1 October 2011. At the end of the 2011–12 season Dragović won the Double, the League Championship title and the Swiss Cup with Basel.

During Basel’s 2012–13 season the team missed their Champions League aim. But in the 2012–13 UEFA Europa League Basel advanced as far as the semifinals, meaning that they played a total of 20 European matches. Dragović missed solely the second leg of the semi-final at Stamford Bridge due to a yellow card suspension, but had played in all the other European ties.

In the domestic championship he played in 32 of the 36 games. He scored three goals in the domestic league this season, all three being against Servette. At the end of the Swiss Super League season 2012–13 Dragovic won the Championship title and was Swiss Cup runner up with Basel.

Dynamo Kyiv
On 26 July 2013, Dragović had signed a five-year contract with Ukrainian club FC Dynamo Kyiv. On 17 May 2015, Dragović helped Dynamo beat Dnipro 1–0 which was the game that won Dynamo their first Ukrainian Premier League title in six years.

On 4 November 2015, Dragović scored his first ever UEFA Champions League goal in the group stage against Chelsea at Stamford Bridge on the 78th minute, as well as scoring an own goal on the 34th. Dynamo ended up losing that match 2–1. In that season he helped Dynamo reach the last sixteen of the UEFA Champions League for the first time in 16 years, getting knocked out by Manchester City 1–3 on aggregate.