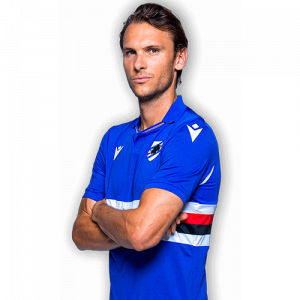 Albin Ekdal (born 28 July 1989) is a Swedish footballer who plays as a midfielder for Serie A side Sampdoria and the Sweden national team.

Formed at IF Brommapojkarna, he has spent most of his career in Italy, where he has made over 200 appearances in Serie A. He has represented Cagliari, Juventus, Siena, Bologna, and Sampdoria in the competition. He also spent three years in Germany’s Bundesliga with Hamburger SV. Ekdal made his senior international debut for Sweden in 2011, and has since then earned over 50 caps for the nation. He represented them at UEFA Euro 2016 and the 2018 FIFA World Cup.

Brommapojkarna
Albin Ekdal started his professional playing career with Brommapojkarna at the beginning of the 2007 Allsvenskan season. He played mainly as a central midfielder but also as an attacking midfielder or right midfielder.

Juventus
On 23 May 2008, Ekdal signed a four-year contract with Juventus of Italy’s Serie A. He made his Serie A and club debut on 18 October in a 2–1 away defeat to Napoli, coming on as a substitute in the 75th minute for Christian Poulsen.

Loan to Siena
On 15 July 2009, fellow Italian top-flight club Siena signed Ekdal on loan for a season. He made 27 appearances for the Tuscans, who were ultimately relegated at the end of the season, and scored once, in a 4–3 loss away to eventual treble winners Inter Milan on 9 January 2010.

Bologna
On 28 June 2010, Juventus sold 50% of their ownership rights of Ekdal to Bologna. As per the deal, the two clubs would agree at the start of each season who would have him as a player. He played 23 total games for the Rossoblu and scored on the anniversary of his last goal, to open a 2–0 win at Bari.

On 23 August 2011, Ekdal was sold to fellow Serie A team Cagliari on a three-year deal for €3 million.

He played 57 games for the side in total, who struggled against relegation in each of his three years with the team, ending with their ultimate descent into the 2. Bundesliga in 2018. He scored once for the team from Hamburg, the only goal of a home win against Hertha BSC on 5 March 2017.

Sampdoria
On 14 August 2018, following Hamburg’s relegation from the Bundesliga, Ekdal returned to Serie A by signing for Sampdoria.