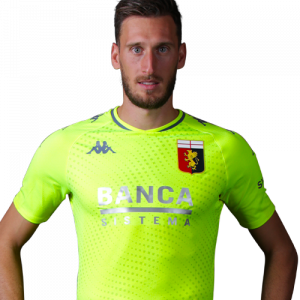 Alberto Andrea Paleari (born 29 August 1992) is an Italian professional footballer who plays as a goalkeeper for Genoa, on loan from Cittadella.

Early career
Born in Giussano, Lombardy, Paleari started his career at hometown club Seregno. In June 2008 he signed for Serie A club a.C. Milan. He was the starting keeper of Primavera under-20 team from 2008–09 to 2010–11 season. In 2010, he was second graded in the Italian championship losing the last match with Atalanta team. In 2011, he reached the first team, coached by Massimiliano Allegri, with number 61.

In the lower leagues
In August 2011 Paleari signed for Serie D club Pontisola. In the 2011–12 season he played 37 matches for Pontisola, which placed second in its round.

In summer 2012, he left for Lega Pro club Tritium.

Next he joined Virtus Verona. He played 34 matches and won the award for “Best Goalkeeper of the year”, announced by the three most important national sports daily newspapers.

In July 2014 he moved to Mantova, where he collected two matches in Coppa Italia and one in his round.

Genoa
On 2 October 2020, he joined Serie A club Genoa on loan with an obligation to buy.