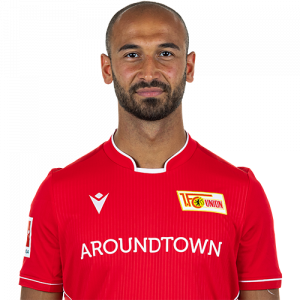 Akaki Gogia (born 18 January 1992) is a professional footballer who plays as a midfielder for Union Berlin. He began his career in Germany with VfL Wolfsburg, before signing for Hallescher FC in 2013 and moving to England to join Brentford in 2015. Born in Georgia, Gogia won international youth caps for Germany at U18 and U19 level. His nickname is “Andy”.

VfL Wolfsburg
A midfielder, Gogia began his career in Germany as a junior with FSV 67 Halle and Hannover 96, before transferring to VfL Wolfsburg in 2004. He came through the youth ranks and made his reserve team debut in February 2010, going on to make 9 appearances. He scored prolifically for Wolfsburg’s U17 and U19 teams, scoring a total of 44 goals in 86 appearances and contributing to the team’s 2010–11 U19 Bundesliga win, in which he scored in the final.

FC Augsburg (loan)
On 11 May 2012, it was announced that Gogia had joined Bundesliga club FC Augsburg on loan for the 2011–12 and 2012–13 seasons. He made the first professional appearance of his career when he came on as a substitute for Marcel Ndjeng in a 2–1 DFB-Pokal first round win over Rot-Weiß Oberhausen on 30 July 2011. He made 14 appearances during his spell, which was cut short by torn ligaments in his left knee.

FC St. Pauli (loan)
In July 2012, Gogia signed on loan with 2. Bundesliga club FC St. Pauli on loan for the 2012–13 season. He made 24 appearances and scored once before returning to Wolfsburg at the end of the season.

Hallescher FC
In July 2013, Gogia dropped down the 3. Liga to sign for hometown club Hallescher FC on a two-year contract. He made 81 appearances and scored 26 goals during his two seasons with the club. Gogia finished the club’s 2014–15 Saxony-Anhalt Cup campaign as the tournament’s joint-top scorer and scored in a 6–0 rout of neighbours VfL Halle 1896 in the final.

Brentford
On 16 May 2015, it was announced that Gogia had signed a “long term” contract with English Championship club Brentford on a free transfer. He missed almost all of September 2015 with a thigh injury and after a change of manager and system in early October, Gogia dropped out of the starting lineup and out of the squad altogether by December, save for two substitute appearances in January 2016.

Dynamo Dresden (loan)
On 8 August 2016, Gogia joined 2. Bundesliga club Dynamo Dresden on loan for the duration of the 2016–17 season, with an option to buy. He broke into the starting lineup and scored 7 goals in 17 appearances before suffering an ankle ligament injury during a league match versus 1. FC Nürnberg on 29 January 2017.

Union Berlin
On 1 July 2017, Gogia joined 2. Bundesliga club Union Berlin on a four-year contract. He made 22 appearances and scored two goals during the 2017–18 season and was a part of the squad which was promoted to the Bundesliga via the 2019 Bundesliga relegation play-offs. On his third appearance of the 2019–20 season, in a league match versus Eintracht Frankfurt on 27 September 2019, Gogia suffered a season-ending anterior cruciate ligament injury.