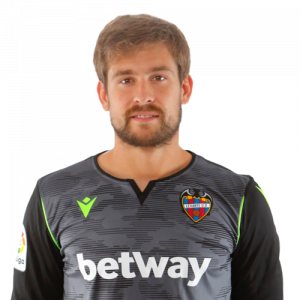 Aitor Fernández Abarisketa (born 3 May 1991) is a Spanish professional footballer who plays for Levante UD as a goalkeeper.

On 29 June 2010, after being promoted to the reserves in Segunda División B, Fernández was called up to the first team for the pre-season as a backup to Gorka Iraizoz and Raúl Fernández. However, he only appeared in 19 matches for the former during the season, mainly due to a hand injury which kept him out for two months, and struggled even more in 2011–12 again due to injuries, being overtaken by new signing Jon Ander Serantes.

Fernández was loaned to fellow league side Barakaldo CF on 22 July 2012 for one year, but had his contract with the Lions terminated on 28 January 2013. He signed a two-and-a-half-year deal with Villarreal CF a day later, being assigned to the B team also in the third tier.

Numancia
On 6 July 2016, Fernández joined Segunda División club CD Numancia on a two-year contract. He made his professional debut on 4 September 2016, starting in a 1–1 away draw against AD Alcorcón.

Initially a backup to Munir, Fernández profited from national call-ups and became a regular starter, holding that position until the end of the campaign. On 27 February 2017, he extended his link until 2020.

Levante
Fernández agreed to a four-year contract with La Liga side Levante UD on 23 July 2018. His maiden appearance in the competition took place on 2 February 2019, in a 0–0 home draw to Getafe CF.

In November 2019, it was announced that Fernández might miss Levante’s next match as he had been called by his local town to work at a polling station for the Spanish general election, however he was later excused from this. He signed a new deal until 2023 the same month, the new release clause being set at €30 million.