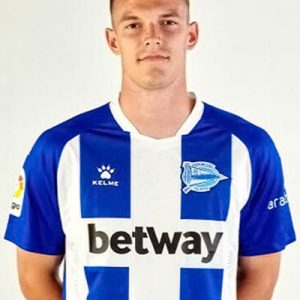 Adrián Marín Gómez (born 9 January 1997) is a Spanish professional footballer who plays as a left back for Granada.

Villarreal
Born in Torre-Pacheco, Region of Murcia, Marín joined local Villarreal CF’s academy in 2009 at the age of 12. He made his senior debut with the C-team in the 2013–14 season in Tercera División, and also appeared with the reserves in Segunda División B the same year.

In May 2014, Marín was called up to the main squad by manager Marcelino García Toral for the pre-season trip to Asia. He also appeared in friendlies against CF Reus Deportiu and Middlesbrough.

Marín played his first match as a professional on 28 August 2014, coming on as a substitute for Jaume Costa in the 57th minute of a 4–0 home win against FC Astana for the campaign’s UEFA Europa League. His maiden La Liga appearance occurred on 14 September, as he started in a 0–0 draw at Granada CF.

On 20 July 2016, Marín was loaned to fellow top tier club CD Leganés in a season-long deal. Upon returning, he extended his contract until 2021 and was definitely assigned to the first team.

Granada
On 1 February 2021, Marín joined Granada on a two-and-a-half-year contract.