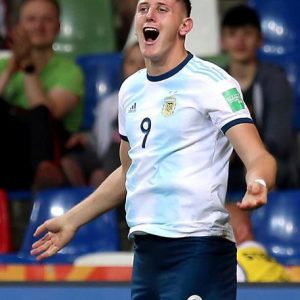 Adolfo Julián Gaich (born 26 February 1999) is an Argentine professional footballer who plays as a centre-forward for Serie A club Benevento, on loan from Russian club CSKA Moscow, and the Argentina national team.

Gaich had youth spells with Unión Bengolea, Sportivo Chazón, Atenas and Atlético Pascanas, prior to joining San Lorenzo in 2014. Four years later, Gaich was promoted into their first-team under Claudio Biaggio, making his professional debut on 27 August 2018 during a draw with Unión Santa Fe; he had previously been an unused substitute in an Argentine Primera División fixture with Lanús and for a Copa Sudamericana game against Nacional. Gaich scored his first senior goal in the following September, netting the opener in a 3–2 win over Patronato; which preceded another two appearances later in the Copa Argentina versus Estudiantes.

On 17 July 2020, Gaich said goodbye to San Lorenzo supporters via Fox Sports’ 90 Minutos de Fútbol ahead of a potential move to Russian football with CSKA Moscow. On 30 July 2020, San Lorenzo confirmed the transfer. On 5 August 2020, CSKA announced the signing of a 5-year contract. He made his league debut off the bench against Khimki on 8 August, before starting for the first time in a defeat to Zenit Saint Petersburg on 19 August.Gaich’s first goal arrived on 22 October in a UEFA Europa League group stage draw away in Austria against Wolfsberger AC.

On 29 January 2021, Gaich moved to Serie A club Benevento on loan. The deal includes an option to buy. After sub appearances against Napoli and Hellas Verona, the centre-forward made his first start and scored his first goal in an away match versus Spezia on 6 March.[ He netted again on 21 March to secure a 1–0 away victory over Juventus.