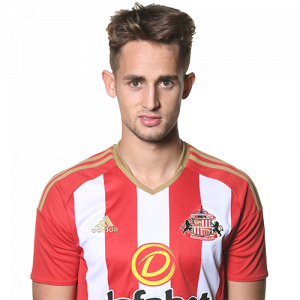 Adnan Januzaj (born 5 February 1995) is a Belgian professional footballer who plays as a winger for Spanish club Real Sociedad and the Belgium national team.

Born and raised in Brussels, he began his career with Anderlecht before joining Manchester United in 2011 at the age of 16. Januzaj broke into the Manchester United first-team under manager David Moyes during the 2013–14 season, but struggled for opportunities under Moyes’ successors Louis van Gaal and José Mourinho, and had loan spells at Borussia Dortmund and Sunderland before joining Real Sociedad in July 2017.

Januzaj made his full international debut in 2014 and later that year played for Belgium at the FIFA World Cup in 2014 and 2018, reaching the semi-finals of the latter tournament.

Real Sociedad
Having failed to hold onto his place in the Manchester United squad, Januzaj signed a five-year contract with Spanish club Real Sociedad in July 2017. He made his debut in La Liga on 10 September, starting in a 4–2 win at Deportivo de La Coruña, and scored his first goal on 5 November in a 3–1 home victory against Basque neighbours SD Eibar. He also scored in a draw with UD Las Palmas and was one of three nominees for La Liga Player of the Month. He also scored a late equaliser against Atletico Madrid that proved vital to secure his team a European place.