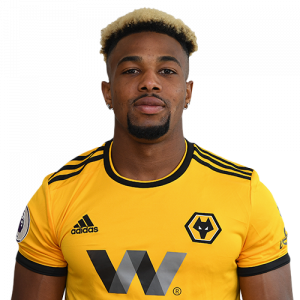 Adama Traoré Diarra (born 25 January 1996) is a Spanish professional footballer who plays as a winger or wing-back for Premier League club Wolverhampton Wanderers and the Spain national team.

Traoré began his career with Barcelona, appearing mainly for the reserves. In 2015 he signed for Aston Villa and a year later Middlesbrough, before joining Wolverhampton Wanderers in August 2018.

Born in Spain to parents from Mali, Traoré has represented his native country internationally at both youth and senior levels, making his senior debut for Spain in 2020.

On 8 August 2018, Traoré joined newly-promoted Wolverhampton Wanderers on a five-year deal for an undisclosed fee in the region of £18 million. He scored his first goal for the team and in the Premier League on 1 September – in his 40th appearance in the competition – in a 1–0 win away to West Ham United. His first start occurred on 27 October, in a 0–1 away defeat to Brighton & Hove Albion.

On 6 October 2019, in his 50th competitive appearance for Wolves, Traoré scored both goals in a 2–0 away victory against reigning champions Manchester City. He scored his first goal in UEFA European club football as Wolves drew 3–3 away to Braga in the UEFA Europa League group stage on 28 November.

Traoré scored his debut Molineux goal for his club in a 1–2 defeat to Tottenham Hotspur in the Premier League on 15 December 2019. He won the PFA Player of the Month award for January 2020 with 45 percent of fan votes.

Traoré’s first goal for Wolves in the 2020–21 season came in their 1–0 home victory over Crystal Palace in a FA Cup third round game on 8 January 2021.