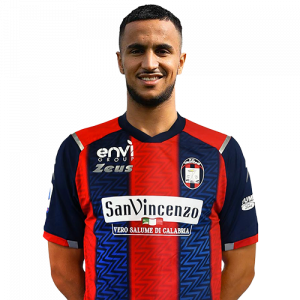 Adam Mohamed Ounas (born 11 November 1996) is an Algerian professional footballer who plays as an winger or attacking midfielder for Crotone, on loan from Napoli, and the Algeria national team.

Early career
Ounas was four years old when he joined the local club Tours FC encouraged by his father, a former goalkeeper, Hadji Ounas. He played for Tours FC for ten years before joining the U14 youth team of Châteauroux.

One year later, due to juvenile mistakes, he left Châteauroux and played for a small local club, Football Club Ouest Tourangeau 37, where Arnaud Vaillant, scout for Girondins de Bordeaux and Yannick Stopyra discovered him.

Ounas made his first-team debut for Bordeaux on 4 October 2015, being introduced in the 72nd minute and scoring the last goal in his club’s 3–2 defeat away to Lorient. He started in the following match against Montpellier HSC, before being substituted in the 59th minute, and was introduced in the 77th minute of Bordeaux’s 0–1 defeat to FC Sion in the Europa League on 22 October. On 25 October, Ounas scored his second Ligue 1 goal 11 minutes after having come on in the 67th minute, helping his club to a 1–0 win over Troyes AC. In December, Bordeaux rewarded him with a professional contract running until June 2019.

Napoli
On 3 July 2017, Napoli confirmed the signing of Ounas from Bordeaux. He scored his first goal for the club in a 1–3 loss to RB Leipzig in the Europa League 1st knockout round first leg.

Loan to Nice
On 30 August 2019, Ounas moved to Ligue 1 side OGC Nice, on a loan deal with a purchase option. On 6 May 2020, Nice decided not to trigger the purchase option and Ounas returned to Napoli.

Loan to Cagliari
On 6 October 2020, Ounas joined Serie A side Cagliari on a season-long loan with an option to buy. On 28 January 2021, Ounas parted ways with Cagliari due to lack of playing time.

Loan to Crotone
On 1 February 2021, Ounas joined Italian club Crotone on a loan deal. He scored his first goal for the Club on 14 February in a 2-1 home loss to Sassuolo. His second marker came against Torino on 7 March; following the match, he became the target of cyber racism, allegedly from Torino fans, which included direct messages on Instagram, of which he published screenshots, calling him a “monkey”, telling him to “return to Africa”, and even hoping for his death.