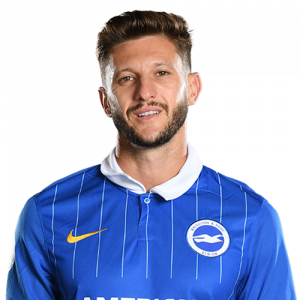 Adam David Lallana (born 10 May 1988) is an English professional footballer who plays as an attacking midfielder for Premier League club Brighton & Hove Albion and the England national team.

Lallana began his youth career with AFC Bournemouth before transferring to Southampton in 2000, where he developed in their academy and became a professional in 2006. After a brief loan back to Bournemouth he broke into Southampton’s first team as they earned two promotions from League One to the Premier League, becoming captain in 2012. After two seasons in the top flight and an international breakthrough, he joined Liverpool for a reported £25 million in July 2014. He appeared in the 2018 UEFA Champions League Final and was part of the squad that won the competition the following season, as well as lifting the 2019–20 Premier League.

Since his senior international debut in 2013, Lallana has made over 30 appearances for England and represented them at the 2014 FIFA World Cup and UEFA Euro 2016.

Lallana signed for Premier League club Brighton & Hove Albion on 27 July 2020 on a three-year contract on a free transfer. Lallana made his debut on the opening day of the 2020–21 season starting in the 3–1 home loss against Chelsea. He later went off injured. Lallana came on as a substitute against his previous club and defending champions Liverpool on 28 November, but was quickly subbed back off due to injury in the 1–1 home draw. On 3 February 2021, he made his first appearance at Anfield since leaving Liverpool, where he came on as a substitute to help The Seagulls claim their first league win at Anfield since 1982. Lallana scored his first goal for Brighton, opening the scoreline in an eventual 2–1 home loss to Leicester City on 6 March.