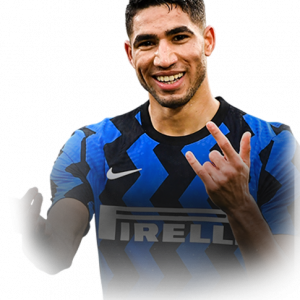 Achraf Hakimi Mouh (born 4 November 1998) is a Moroccan professional footballer who plays as a full-back for Serie A club Inter Milan and the Morocco national team.

Mainly a right-back or right wing-back, he can also play on the left or as a winger.

Inter Milan
On 2 July 2020, Serie A side Inter Milan announced the signing of Hakimi on a five-year contract, with a reported fee of around €40 million. On 26 September 2020, Hakimi made his debut and provided an assist in a 4–3 win against Fiorentina in the Serie A. He scored his first goal for the club in the subsequent league game against Benevento, which Inter won 5–2.