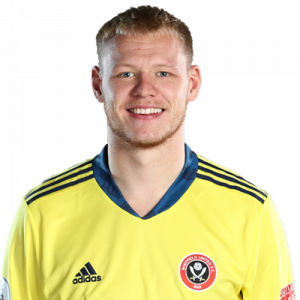 Aaron Christopher Ramsdale (born 14 May 1998) is an English professional footballer who plays as a goalkeeper for Premier League club Sheffield United and the England U21s.

Born in Stoke-on-Trent and raised in the Chesterton area of Newcastle-under-Lyme, Ramsdale joined Sheffield United in 2013. After graduating from Sheffield United’s youth academy, Ramsdale signed a scholarship with the club in May 2014. Ramsdale appeared twice as an unused substitute during the 2015–16 season against Coventry City and Scunthorpe United. In May 2016, he signed his first professional contract with the club.

Ramsdale made his professional début starting in a 6–0 home victory over Leyton Orient in the FA Cup, keeping a clean-sheet in the process. He also made another appearance in the FA Cup against Bolton Wanderers but lost 3–2.

On 18 May 2018, Ramsdale received a call up to England U21s for the first time by Manager Adrian Boothroyd, for the Toulon Tournament with England’s group containing fixtures against Qatar U21s, China U21s and Mexico U21s. Ramsdale made his first cap for the England U21 squad on 1 June 2018, playing the full 90 minutes in a 4–0 win against Qatar.