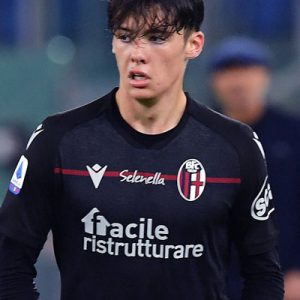 Aaron Hickey (born 10 June 2002) is a Scottish professional footballer who plays a left-back or central midfielder for Serie A club Bologna.

Early career
After spending time in the youth system at Heart of Midlothian, Hickey had a spell with the academy teams at Celtic. After four years at Celtic he chose to return to Hearts in 2018, with Celtic receiving 30% of a future transfer fee.

On 22 September 2019, he scored his first senior goal, the winner in the Edinburgh derby as Hearts won 2–1 away at Hibernian.

In August 2020 he was linked with a transfer away from the club, with interest from German club Bayern Munich, Italian club Bologna, English club Aston Villa, and French club Lyon. Hearts manager Craig Levein also revealed that Celtic had made “five or six” attempts to sign Hickey. Towards the end of the month the BBC reported that Bologna had made the first official bid for Hickey, although Hearts said that the offer was too low.

Bologna
Bologna made an updated offer for Hickey, which was accepted by Hearts on 8 September 2020. On 24 September 2020, Hickey completed a moved to the Serie A side for an undisclosed fee believed to be around £1.5 million. He said he chose Bologna over Bayern due to the Italian club’s family feel, and their intention to use him in their first-team. Due to the suspension of regular left-back Mitchell Dijks, Hickey made his first Serie A appearance on 28 September in a 4–1 win against Parma.