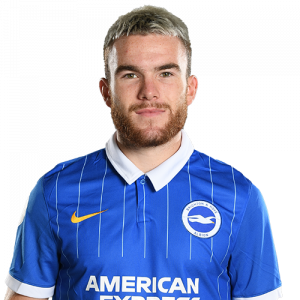 Aaron Anthony Connolly (born 28 January 2000) is an Irish professional footballer who plays as a forward for Premier League club Brighton & Hove Albion and the Republic of Ireland national team.

Brighton & Hove Albion
Connolly was born in Oranmore, Galway and started his career in the youth team of Maree/Oranmore FC in 2005. He joined Mervue United’s youth team at the age of 11. In the summer of 2016 he joined Premier League side Brighton & Hove Albion on trial, impressing enough for the club to offer him a two-year scholarship with the under-18 side. He was fast-tracked in the under-23 side and also went on to make his debut for the first team at the age of 17 when he appeared as a substitute for Tomer Hemed in the 1–0 EFL Cup win over Barnet in August 2017. He signed a new three-and-a-half-year contract with Brighton on 31 January 2019.

Loan to Luton Town
On 31 January 2019, Connolly joined League One leaders Luton Town on loan for the remainder of the 2018–19 season. He officially joined up with Luton on 2 April 2019 after returning from injury. Connolly made his football league and Luton debut on 13 April coming on in the 68th minute at 1–1 away to Charlton. Luton went on to lose 3–1 at The Valley.

Return to Brighton
On 27 August 2019, Connolly scored his first senior goal in a 2–1 away win over Bristol Rovers in the EFL Cup. He made his league debut for Brighton four days later, coming on as a substitute for Neal Maupay in the 66th minute of a 4–0 defeat away to Manchester City. Connolly made another appearance from the bench in The Seagulls next fixture, a 1–1 home draw against Burnley on 14 September. He made his first Premier League start on 5 October in a match against Tottenham Hotspur where he scored his first two Premier League goals in the 3–0 home victory. Connolly’s next goal came in the last game of the season in a 2–1 away win over Burnley, finishing the season with 3 goals in 24 league appearances. He signed a new four-year contract with Brighton in July 2020.

Connolly scored his first goal of the 2020–21 season in Brighton’s second league match scoring The Albions third in a 3–0 away win at Newcastle. He scored his second goal of the season on the second day of the new year tapping The Seagulls into the lead in an eventual 3–3 draw in which he came off injured at the break against Wolves. Connolly came on as a substitute in Brighton’s 1–0 away victory over defending champions Liverpool on 3 February claiming their first league win at Anfield since 1982.